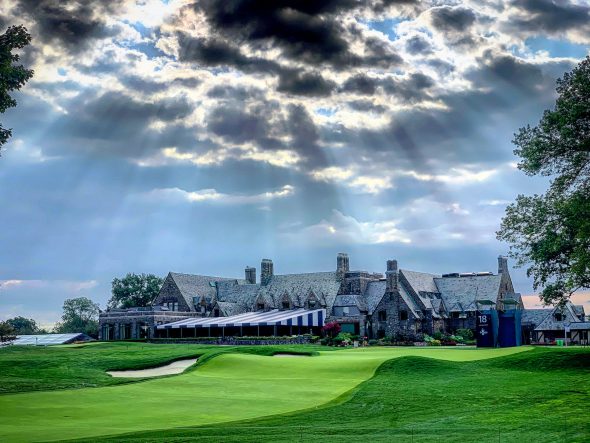 When I started this blog over five months ago (already!) I figured I could keep up a pretty good pace of columns. For better or worse, however, last week, after 33 consecutive postings I had to take a break because real work intervened. Such is the fate of a freelancer, to answer the editor’s call.

Within the space of a few hours I had landed five assignments, all of them due within a week. That’s when you drop everything and focus on meeting deadlines; 7,500 words later I am relieved to say I met the test. Luckily they were all related, having to do with this week’s U.S. Open national golf championships at Winged Foot Golf Club in Westchester County, New York.

The morning after those assignments arrived I made the trip down to the golf course, just over 100 miles from our house here in Northern Connecticut. As I made my rounds and interviewed the people I needed to reach – all of whom were amazingly accommodating on short notice – I kept reminding myself of the different assignments and the need to make sure I took legible notes. Too often while walking and taking I write down a lot, only to find when I get home that I can barely make sense of the scribble.

Not that I am usually note-dependent in my writing. I tend to rely far more on feelings and visual impressions and only pepper in quantitative or technical details and the occasional quotation by way of emphasis rather than main construction. I loathe that style of sports reporting that consists of quotes strung together.

As I walked the golf course – alone as usual, without playing it, just looking and observing – I flashed back to the time I started this process. It was May 1989, and I was at Oak Hill Country Club in Rochester, N.Y., on media day doing my preview of that U.S. Open. A snow storm blew in the night before, and when I awoke the course was covered with several inches of snow and the event, which included golf, was cancelled, with interviews to be rescheduled for later.

The weather forecast called for warming, and I was determined not to go home empty-handed. So I got hold of a yardage book and started to walk the course just as the snow was melting away.

In those days I used a small tape recorder for note taking. As I made my way around I simply recorded my thoughts – “interviewing a golf course,” I called it. The practice has remained ever since, though instead of a tape recorder I use notes, schematic diagrams I scratch out, and jot down the occasional phrase that strikes my brain.

I’m not much of a golfer when it comes to skill but I have a lot of experience in dissecting a golf course. As a former PGA Tour caddie I saw how the game is supposed to be played. And while most writers focus on the elite players – Jack Nicklaus. Tiger Woods – I was always more keen listening to architects and greenkeepers ply their trade. In 1999 I became founding editor of a trade magazine devoted exclusively to golf course superintendents and ended up writing at least half of every issue (twice a month) for six years.

Strange where work takes you. After a while you start sounding like you know something. In my case it’s only because I knew who to learn from.

As I walked the Winged Foot Golf Course a lot of this accumulated background started replaying itself. Having caddied in six U.S. Opens (1977, ’79, ’82, ’83, ‘86, ’88) and having covered 24 in all with press credentials, starting in 1982, I was comfortable with my ability to form judgments about the golf part of the scene. But this year’s event felt different – as does everything else in our world in 2020.

For one thing, the U.S. Open was supposed to take place back in its traditional mid-June slot, with the final round on Father’s Day. There were also supposed to be about 40,000 spectators each day, with an accompanying stadium-style infrastructure of bleachers, concession stands, merchandise tents and nearby parking lots to accommodate them

As everyone knows, the COVID-10 pandemic intervened. For a while, this part of New York State was akin to Ground Zero in intensity. It’s amazing that they are now able to hold the event at all, even if under stringent conditions of social distancing that prevent fans from attending and that severely limit the presence of volunteers and media. The credentials I had for June went the way of everything else back then and so I had to make the best use of my sole day-long research visit. During actual play this week I’ll rely like everyone else on what I can glean from TV and from the constant thrum of social media and digitally-posted video.

It won’t be the same. But then nothing is right now. Winged Foot will still hold a national golf championship. It will still be exciting to watch. But it will also be tinged with a certain kind of wistfulness, as if experienced through a semi-permeable membrane that occasionally clouds up in sadness.