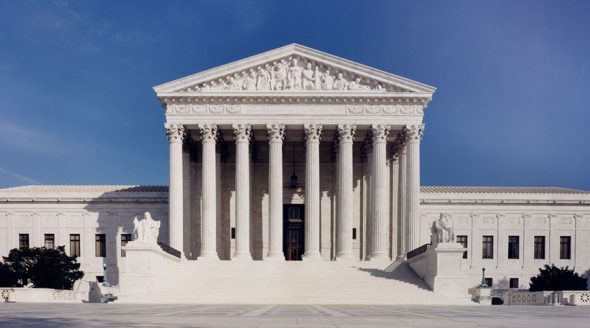 I keep pretty good records. Somewhere in my various files and boxes of papers are copies of my publications, correspondence going back decades (back when they were actual, physical letters), papers from college and graduate school, taxes records, family documents. For all the maintenance of written records I never did keep the papers I wrote back in high school – on a manual typewriter, hunt n’ peck method, lots of white out, without regard to margins. Too bad, because when news hit Friday night of Rosh Hashanah that Ruth Bader Ginsburg died, I teared up in sadness and fear and flashed back to a sophomore or junior year project I wrote for American history class on the rise of the Supreme Court.

I remember the title, more or less: “How the Supreme Court under Chief Justice John Marshall Expanded Federal Powers through a Loose Interpretation of the Constitution.” It focused on three landmark decisions that came to shape and define strong federal authority: Marbury vs. Madison (1803), McCullough vs. Maryland (1819), and Gibbons vs. Ogden (1824).

Back then I was pretty geeky about American history and social studies. In between reading baseball biographies and sports history I pored through American and world history. My first prized book when I was in the second grade was “The Presidents and their Wives.” For my bar mitzvah my parents got me William Manchester’s “Death of a President,” which I dutifully gobbled up. And in junior high school I started writing papers about foreign wars and geography.

It helped that I loved listening to my grandfather’s stories about life in the Old World – Eastern Europe. And of course, this was the 1960s, when the world outside, whether of civil rights, Vietnam War protests, uprisings in Paris, Prague and assassinations of American political icons  made it impossible to hide from what was going on out there.

My first weekend in college at SUNY-Binghamton in upstate New York coincided with the riots at Attica State Prison, not far away. By the end of the year we had shut down the campus while blockading the federal building in downtown Binghamton, New York in protest over the mining of Hanoi and Haiphong harbors. I was already spending the spring and summer of 1972 as a volunteer for the McGovern campaign. It was easy to have hopes back then of changing things.

It’s harder now, but more important than ever. Many of us felt that again last Friday night when we heard that the “Notorious RBG” had given out. “If only she could have held out a few more months,” I thought. And then I immediately realized how grateful I was that she had held on as long as she had.

Without an independent judiciary there is no possibility of democracy. Had not an independent, professional court system done its job in South Africa in the 1970s and 1980s Apartheid would never have been dismantled. Among the first steps of authoritarianism in Poland, Hungary and Turkey lately has been the hijacking of the federal courts and the installation of hack loyalist judges beholden to one party leadership instead of to principled law.

We’re watching the same thing today in Washington: a slow, relentless coup as the Trump Administration has eroded the independence of the Department of Justice by relying upon an Attorney General in William Barr who is more intent on enabling a lawless President than on serving the Constitution. He has been backed wholesale by a spineless Senate majority of Republicans who think that it is more important to maintain power than the rule of law.

Having stolen one seat on the Supreme Court by refusing to consider Obama-nominee Merrick Garland in 2016 and awaiting 2017 so Trump could appoint Neil Gorsuch, they are now about to try reversing their principle of not approving an associate justice in a presidential election year. It’s a complicated political matter whether they can pull this one off and rush a Trump-nominee onto the Supreme Court before Jan. 20, 2021.

Their hope, obviously, is not only to secure a solid conservative majority for a generation but also to gear up for a contested 2020 Presidential election on Nov. 3 and gird for a fight that might actually go to the Supreme Court to decide dicey matters of electoral law – as happened in 2000, when the Court handed George W.  Bush a decision over Al Gore.

The short term cynicism has terrifying long-term consequences and needs to be resisted. Ruth Bader Ginsburg is gone, but her voice and her example provide powerful inspiration that courts must remain principled and above the partisanship, grifting and obeisance to a tyrant. If that sounds Biblical it’s because it is.

This article has 5 comments