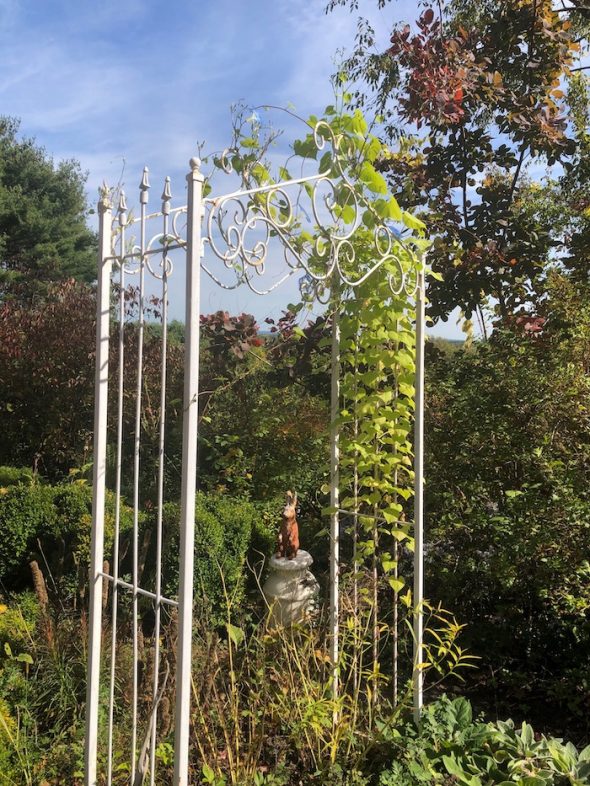 Had another one of those dreams the other night. The kind that reminds you how powerful and strange your brain can be. Afterwards I had to run through a quick reality check to ground myself and make sure it wasn’t true.

This one has been an occasional theme the last few years – not exactly recurring, but familiar enough that I know it represents something ominous. No, it wasn’t about some government takeover by a bloated mobster. That I would classify as hyper-realism, too closely tied to everyday events. This one was less embedded in the news cycle than something that has been bugging me as I watch various utility companies cut trees down everywhere they can.

I dreamt that I woke up to the hillside fronting our house completely denuded of hardwoods and conifers and our entire yard stripped of the various specimen trees we have been carefully cultivating the last 18 years. Not only were the trees all gone; so, too, was the habitat for birds, bears, turkeys and pheasants we had come to cherish. In their place were the beginnings of high-tension electrical lines. I was livid. Our property had been shorn of everything that made it special -another victim of eminent domain. Or in this case, utility domain.

We live a half a mile away from an electrical power relay station. Between the electrical company and the Connecticut State Department of Highways, people not accountable to anyone seem intent on cutting down anything and everything that gets in their way. Perhaps they are simply bored and need to exercise the grinding power of their 40-inch Husqvarnas to remind us that they can. A nearby road divided by towering pines has been clear cut in the name of “safety,” the barrier provide by those trees replaced by a metallic bumper fence that looks like crumpled aluminum foil.

It probably hasn’t helped my imagination that the electrical company has been working up in the hills around us replacing the 80-foot tall poles that support the power lines. We don’t hear them or see their handiwork unless we take one of our extended hikes – which we did the day after my dream.

The dream was nonetheless unsettling for revealing how precarious my sense of things has been of late. It was also yet another reminder for how much more I appreciate native landforms than the utilitarian aesthetics of engineers.

I’ve had other themed dreams. One, still recurring, involves the frustration of not being able to manage a simple task. It could be trying to make a phone call (for some reason, usually dialing, and from a phone booth) and never getting through because I dropped the coins, wind whipped the paper on which I had jotted down the number, my finger slipped on the dial or I mishandled the speaker and fumbled it away.

Or it could be a frustration dream about getting stuck in the house when I am trying to get out for an appointment and being repeatedly delayed: looking for something I had forgotten or just getting distracted by a phone call or the cats or making sure I had my wallet and keys.

There was an unsettling time starting in my late teens when I dreamt regularly about being able to fly. Not fly an airplane; just lifting off on my own power. I had the conviction that I could cruise through the air at a height of several hundred feet and survey my town or campus, The sense of flying was so palpable that there were many times where I would have to get out of bed, brace myself and see if I could actually lift off – which I never did.

I’ve had the occasional inspirational dream, as well. One actually got me through graduate school.

I was in a doctoral program studying political theory and intensely engaged in a study of Niccolo Machiavelli’s writings, mainly a comparison of his notorious “The Prince” (1513) with his more civically-minded “The Discourses” (1517). They were relevant to my interest in the early modern state and the extent to which post-feudal government could actually control public affairs. I awoke one morning that semester (in my first year of grad school) repeating a phrase that had come to me in a dream about the open-ended, incomplete nature of governance. ”Machiavelli and the Rise of the Indefinite State” was the phrase, and as soon as I got up I wrote it down and started taking notes.

Within two weeks those notes turned into a 50-page seminar paper. Eight years later they provided both the title and the substance of a chapter in my dissertation. It later animated a section of my first book on the politics of nuclear weaponry. I have waited in vain for a follow-up dream that would be as academically productive. When that didn’t materialize (yet) I left academia to become a sports journalist.

What goes on in the mind to produce stuff of such endurance and sweep? Or to make one feel like you can fly? Luckily, such dreams are now rare for me. I tend to dream pretty trivially, without complicated plots or dense symbolism. But every once in a while my mind takes off and goes places that seem so vivid and powerful.

Freud argued that “dreams are the disguised fulfillment of a repressed wish.” In my mind, they are more like a door that occasionally opens too wide and can’t readily be shut. Of course these days it’s hard to know if waking life or one’s dream state is the real nightmare.

With any luck in a few weeks we’ll wake up and be able to indulge again in proper sleep. There will still be strong dreams, but at least they’ll be ours in private.