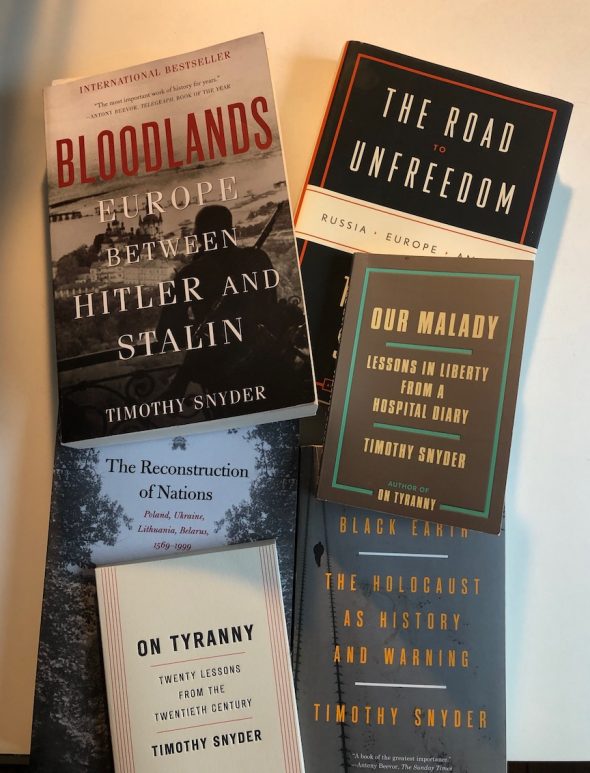 One of the unexpected benefits of these last ten months spent basically nesting at home is all the time I’ve had for reading.

Not traveling my normal 100-150 days a year has cleared a lot of time. There’s also been a lot less time watching sports, since I find it virtually impossible to get excited about what feel like sanitized, made-for-TV contests in empty stadia. Besides, there’s been something distasteful to me about these athletes getting tested multiple times a week when for so long everyday folks had difficulty finding places where they could find out if they were Covid-infected. So in an unintended form of protest I simply found myself watching sports less and having more time to read.

I’ve always been an avid reader. As a kid I split my time between baseball biographies (“The Lew Burdette Story”) and American history.  For my bar mitzvah I was thrilled to receive two tomes that I cherished and still have: Encyclopedia of Jews in Sports and William Manchester’s account of the JFK assassination, Death of a President. I can easily call up the emotions I had as a young teen during a rare conversation with my otherwise distracted, engineering-oriented father about The Diary of Anne Frank. And I still can remember the joy of losing myself for a summer day in 1974 on the couch reading The Art of His Life, Jay Martin’s biography of the quirky 1930s New York writer Nathanael West. It was the first of many such writers’ biographies I have read, most of them from that interwar period.

As an academic by training and a freelance writer the last 25 years, I have long felt that appeal of getting immersed in somebody else’s words. This past year that has involved a number of themes, mainly classical political theory and modern politics. Those are topics I studied closely in graduate school and have been writing about lately on the side. The importance of that historically-oriented study and today has been made admirably clear by a number of writers, chief among them a Yale University scholar named Timothy D. Snyder.

He’s quite the researcher, since he is fluent in five Continental languages and reads in another half dozen – enough to be able to comb through scattered libraries that most historians would not be able to manage. He’s also that rare academic who writes well. Indeed, he writes with passion – a trait so sorely lacking in my own formal field of political science that I left it behind because the prose was unbearable.

Like any keen craftsman, Snyder started narrowly and has broadened over the last two decades. It’s called acquiring a core competence that you build upon and can always return to with a feeling of security knowing you have a home base. In his case, it’s modern Central Europe, with the focus on Poland, the Ukraine and the Baltic Republics.

Snyder broke through from the ranks of esoteric researcher to public intellectual a decade ago with Bloodlands: Europe Between Hitler and Stalin, an unrelenting account of how millions of civilians died at the hands of those two mass murders. Since then, he’s turned his attention more towards drawing lessons between the experience of mid-century authoritarianism and more recent politics involving the likes of Putin in Russia and Trump in America. That was the major point of his The Road to Unfreedom: Russia, Europe, America. He distilled those findings in the form of a convenient little handbook of democratic resistance called On Tyranny: Twenty Lessons from the Twentieth Century that has been on best seller lists for the last five years.

Now comes Our Malady: Lessons in Liberty from a Hospital Diary. It starts out as a highly personalized account of his near death just a year ago from peritonitis and sepsis – both of them poorly diagnosed. But this is less about his own plight than about what it’s like to live in a highly industrialized, highly technical society where the health care system is run for profit by corporate managers rather than by doctors on behalf of patients.

When you turn a basic right into a commodity, you betray the basic ethos of medicine and you place everyone in a case of precarious uncertainty and worry. The wealthy and the privileged might believe they can spend their way out of the dilemma, but even that path is fraught with uncertainty as you are subject to the whims of a system that has turned health into a business and where service is rendered less through direct examination than via checklists on a computer screen.

This is one of those books that you wish were longer. It was written during the heat of the moment in the first half of 2020 when a global pandemic was ravaging citizens and governments varied widely in their response. That certainly includes the U.S., where the administration was completely irresponsible in its response, with little ability to test, outfit health care workers with protective equipment or properly mobilize the citizenry about the extent of the pandemic it faced. He doesn’t blame U.S. leadership for causing the pandemic, but he does lay the blame clearly on leadership for failing to mobilize quickly and honestly. In this sense he makes the link to his earlier studies of how mass death occurs.  “Authoritarians will allow people to die uncounted,” writes Snyder, “rather than admit that the number of dead in their country is high.” (p. 99)

Snyder finished dashing off this little book back in the summer when the death toll here was “only” 150,000. Now that count has nearly tripled. There are powerful lessons to be learned in this little volume about the relationship between personal illness and the public good. As he writes by way of introduction, “the word ‘freedom’ is hypocritical when spoken by the people who create the conditions that leave us sick and powerless. If our federal government and our commercial medicine make us unhealthy, they are making us unfree.” (p. 17)

This article has 3 comments