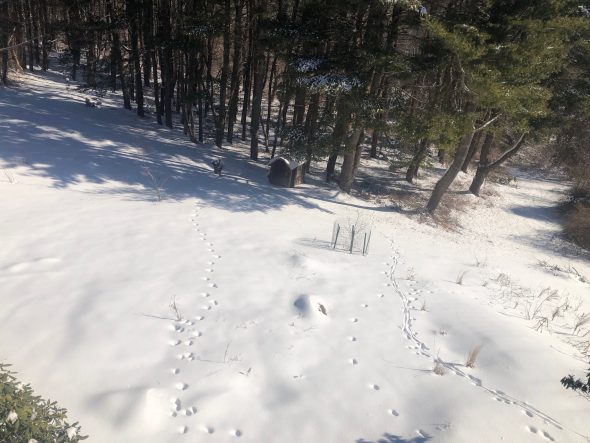 About half the country is under some sort of extreme winter weather advisory. That includes lots of places where the slightest snow fall or ice sheet produces panic and highway pile ups because folks are simply not accustomed to dealing with such cold and their rear-wheel drive cars are not well-equipped to handle the slick conditions.

Here in northern Connecticut we are used to the snow and the ice, which is why lots of people here have Subarus with front-wheel drive and a four-wheel drive option. Our two, with 105,000 and 208,000 miles respectively, have seen their share of storms. With any luck we will hang on to them until they reach the quarter-million mile mark, at which point we’ll consider replacing the worn one.

We have a long downhill driveway, 170 feet from the road and sloped at about a steady seven percent. When it ices up or gets snowed in it’s usually easy to negotiate in our cars once we have been dug out by our regular snow plow service. But there is a lot of unevenness to the surface, a condition that is getting worse as freeze-thaw cycles have caused it to buckle over the years. As I write this I am looking at an estimate from a paving company at the cost of resurfacing the driveway. There are several zeros and a comma, so I will need to sell quite a few more articles and part of a book advance in order to fund that project. But not until we get a new sump pump system for the basement.

Given our precarious driveway, we always have to warn people in winter not to try it if their car – or their nerves – are not prepared. Even then, it is sometimes a struggle to get up the hill. On more than one occasion we have had guests or delivery people get stuck at the bottom, and I have to go into emergency mode by distributing whatever frictionable material will help. We start with sand – a large supply of which we keep in a bin up top and another in the garage. At times I have reverted to other media, with cat litter an excellent choice for the job though I have yet to study its environmental impact on the adjoining garden beds.

True story. A down-on-his luck former pro golfer, who had once enjoyed considerable success in Australia and New Zealand, called me with news that he had written a memoir and wanted me to see it. It was the dead of winter, the whole area heavily snowed in, and I warned him not to take his car down the driveway.

Sure enough he arrived in a massive Fleetwood Cadillac that seemed to float down the driveway and came to a halt inches from a stone wall we had fronting a kitchen garden. The book he showed me was a mess. He was obviously in terrible straits with his health and finances, and when it came time for him to leave I watched helplessly as he made three or four efforts to get his boat up the hill. I ended up calling a local tow service and paid the driver in cash without ever telling my visitor how much it cost.

You would think that tow trucks would be immune to such an obstacle as the driveway, but at least once, when I had to get my car towed the driver refused to take his truck down and instead extended a metal chain nearly the length of the driveway. On another occasion the mid-size tow truck got stuck in the turnaround and had to be towed out by yet another truck.

I find weather amazing for its power and relentlessness. Looking back at my college days, I now wish I had taken a course in meteorology instead of wasting away two of my three science requirements on Intro to Math History and Psychology 101. The other one, Geology 101, was decidedly worth it. But one of many consequences of my choices back then is that I am now at a loss to understand what “dew point” is. And I still cannot fathom how each snow flake is unlike any other; I prefer believing there are only three or four variants and that the notion of infinite variation is a myth perpetrated by the Weather Channel.

A lot of my friends live in warmer climates and tease me about the winters here while they luxuriate in the heat. Our own preference is for seasonality and for the chance to wear a wide range of clothing during the year. Along the way we get to watch plants, animals and birds respond to the very changed weather patterns.

I’m reminded of this when I look out onto the backyard following a snow and see the crazy quilt trails of footprints left behind by all manner of visitors: deer, bears, raccoons, bobcats, coyotes, squirrels, rabbits, the neighbor’s dogs and what must be our own version of a Yeti. How else to explain the depth of those imprints? It’s enough to make me think about getting a critter cam to document the traffic.

You learn in winter to stay off the roads until they are safe to drive. But there is also so much to admire. I love venturing out by foot as the ground crunch gives way; the soft feel of the snow and the way the white turns shades of blue and gray depending on the angle. You see the altered pattern of light as the sun’s rays flash through the barren trees as if a strobe light. I would miss that in the South or Southwest. Those who view winter through a lens of inconvenience are missing out on a lot. Eleven months into our huddling here together, there is much to be grateful about.