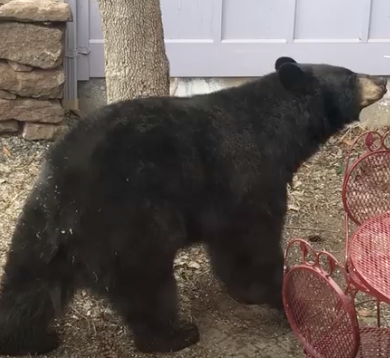 We can tell here in north central Connecticut that we are coming up on spring because it’s time to take the bird feeders down. If we don’t do it, someone else will. In this case, it’s our latest neighborhood denizen, a circa-325-pound, male black bear that, for obvious reasons, we are calling Claude.

With warming temperatures of late before the latest chill we figured the bears would be back. They have become increasingly common visitors to our yard and to our area since we first started taking notice of them 15 years ago. Far from encouraging them, we do everything we can to avoid tempting them, which is why we keep our garbage pail stored in the garage until we put it out at the last minute. I had a premonition of things to come Monday morning when I found the pail up top by the street on its side and partially emptied. The wind had been howling, and it’s possible a gust blew it over. But now I’m pretty sure it was the work of our newest incarnation of “Ursus americanus.”

We had already taken to bringing in the bird feeder at night; its location just outside our kitchen, and within view of the dining room, provides a tempting daytime theater for us (and our two cats) to observe the feeding habits of the various birds that regularly stop by. This time, however, when my wife, Jane, looked out, it was this pretty substantial sized bear sticking its tongue into the feeder and enjoying an afternoon meal.

There was no need this time to sound the air horn – though we have in the past when as many as two or three bears have gathered in the backyard to take a bath in our little pond. This time it was simply wondrous to watch and record the action. It takes a pretty confident bear to walk into a cornered area like our kitchen garden and simply feed away. We’re thankful it did not try to pull the whole thing down and, instead, played by civilized rules of feeding.

After about 15 minutes or so of taking in nourishment our newfound friend wandered off. He walked between our two cars, up the driveway and simply disappeared down the hill before ever reaching the street. The ability of these creatures to make their way quietly around and seemingly to disappear in a moment is one of the more remarkable aspects of nature that we get to see without ever tiring. There’s no need to report his presence to animal control officers. Everyone in our neighborhood is well aware of their presence and we tend to keep informed. In fact, we’re pretty sure this guy was the same one who visited our friend’s yard early that morning, six miles away.

Connecticut is home to about 500 bears. Divided by 5,000 square miles, that’s 10 square miles per. Even in the country’s most densely populated state, that is plenty of room for these animals to find food. The last thing we want to be doing is providing more food for them because then they would become even more likely to show up. In other words, we would advise against letting freshly baked goods cool off on the screened-in back porch. It’s enough just to appreciate how adaptive these bears are to an environment in which we are imposing on their world. It also helps to know that they are more scared of us than we ever need to be scared of them.

Of course we also know to stay away from mama bear when her cubs are around. There the issue isn’t innate hostility or aggressiveness but the potential for maternal protection to get out of hand. So we will keep the bird feeders in for the next six or seven months. Keep the garbage pail in a secure place. Make sure the air horn is fully charged. And when we go out we will wear bright enough clothing and make a lot of noise so that we can co-exist with Claude and his buddies in a way that remains safe and inspiring for all of us.