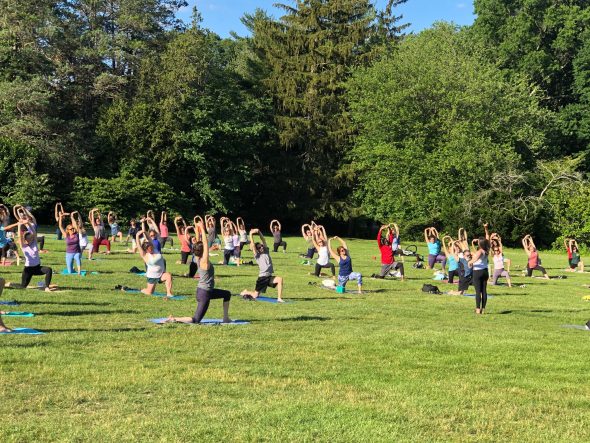 At the risk of sounding melodramatic, it feels as if we have all been released from some protracted burden. Being able to shed masks has been the least of it, even if the most symbolic. But after fifteen months of avoiding people, staying at home, worrying about family health and hoping the government would finally get things right, it is a great relief to come out from behind the sheltered existence we have had to live and enjoy life again.

Especially the outdoors. My wife, Jane, and I were reminded of this the other day during a glorious tour of Elizabeth Park, the 102-acre municipal retreat on the west side of Hartford, CT. The city has its economic troubles, but among its many considerable assets is an extensive park system whose character dates to the late-19th/early 20th century design work of the famed Olmsted Bros. landscape architecture firm. Not the handiwork of Frederick Law Olmsted himself but of his son and son-in-law. Like their father, they had an impressive knack for creating sylvan public spaces, mixing up broad meadows, formal gardens, dense copses, trails, ponds and small streams as well attractive buildings properly scaled for recreational use.

Elizabeth Park’s big attraction this time of year is the country’s oldest municipal rose garden – dating to 1904, There are hundreds of hybridized varieties – red, orange, pink, yellow, white – many splayed across arches, all arrayed in a radial land plan that centers on a gazebo. The demographic diversity of the metro area is evident in the people who stroll the grounds, with the gazebo a popular site for weddings, graduations and any other excuse to celebrate.

On the lawn adjacent to the rose garden this time was a large gathering of folks doing yoga. I would assume that the pandemic had forced such a class outdoors for reasons of safety. It seemed like a perfect way to exercise one’s newfound freedom.

There’s a reason that state and national parks across the country are now reporting record levels of attendance. Campsites are booked up months in advance as families flex their wings and venture out. It would be admirable if this results in some enhanced appreciation for our environment and for the measures needed to protect it.

Back home, one of the enduring consequences of the pandemic for me has been an enhanced commitment simply to working our 2.4-acre yard. A very tentative venture at a small wildflower garden produced spectacular results last year and has led to a doubling of the space this year. There is something so pleasing about having cultivated diverse plant life out of weedy ground. The area has proven attractive ground for butterflies, bees and other pollinators.

All of the yard work has also provided me with more sustained and meaningful exercise than I was getting in a gym. I always thought the idea of a workout was an hour or so virtually wasted; it was good for the body but yielded nothing tangible other than an abstract sense of health.

Now with my near-daily regimen of an hour or two mowing, hacking, weeding and schlepping I produce palpable results. The cumulative effect has been a modest landscape creation that falls well short of Olmsted & Sons but still feels like a powerful transformation, of body, mind and garden.